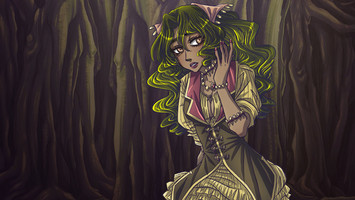 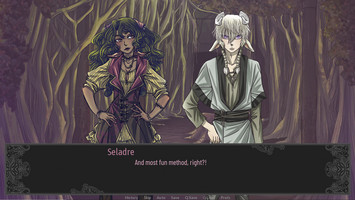 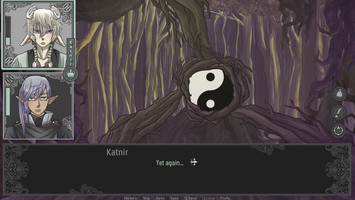 Ack! It's taken me so long to upload this update. Truthfully, I am just having trouble finding the motivation to properly bug test every option. Rather than sit on this update further, I have uploaded it as is. I apologize in advance if I've missed something obvious. Please let me know if you find any bugs or typos. Thank you kindly for your support, patience and assistance!

Choose from the start if you want to follow Jou, the dreamwalker or Katnir the truthseeker. Though they both come from a similar origin, their fates are quite different! View the story and world through a new perspective.

Through answering the questions of monster plant, Black and White, your compatible companion is chosen. Try different answers if you want to form a bond with either the noble elf, Reith or the cunning human, Seladre.  Friendship or Romance routes are possible with both protagonists and both companions.

Psychological Fantasy VN/Adventure: Explore the complexities of the heart and mind.

I'm so happy about this update!!! I have been waiting since you announced the game back in summer for both protagonists to be released to play it, since I enjoy comparing routes and all that (like I did for Soul Union). The weekend cant come soon enough I've been waiting for months ahhhhhh!!

As for the bugs, to be honest, I don't think minor bugs matter that much, we'll help you find them; don't burn yourself out by testing every single option there is, but thank you so much for the effort you put into your games!

I also have so much to say about Soul Union since I was FINALLY able to replay it with different choices this time, but I'll leave those thoughts in the other game's page hehe!

Ah thank you so so much! It's nice to know that you are interested in seeing the variations of the story, even if it does get a bit repetitive at times. Truthfully I just love the options as a creator, as in other mediums, exploring these kinds of deviations is not always possible.  I really appreciate you sharing your enthusiasm and continued interest in my "Weaverse". It's healing my spirit ;). Hope you have a nice and enjoyable weekend and I look forward to reading more of your thoughts in the future~

This is super exciting, thank you for the update! (and sorry to hear motivation has been a struggle at times, I hope you manage to catch a break and recover some ~<3)

Thank you so much! I so happy to know you are still following some of my work. I notice you have done a lot of work on Inverted Spire! Best wishes to your projects as well~